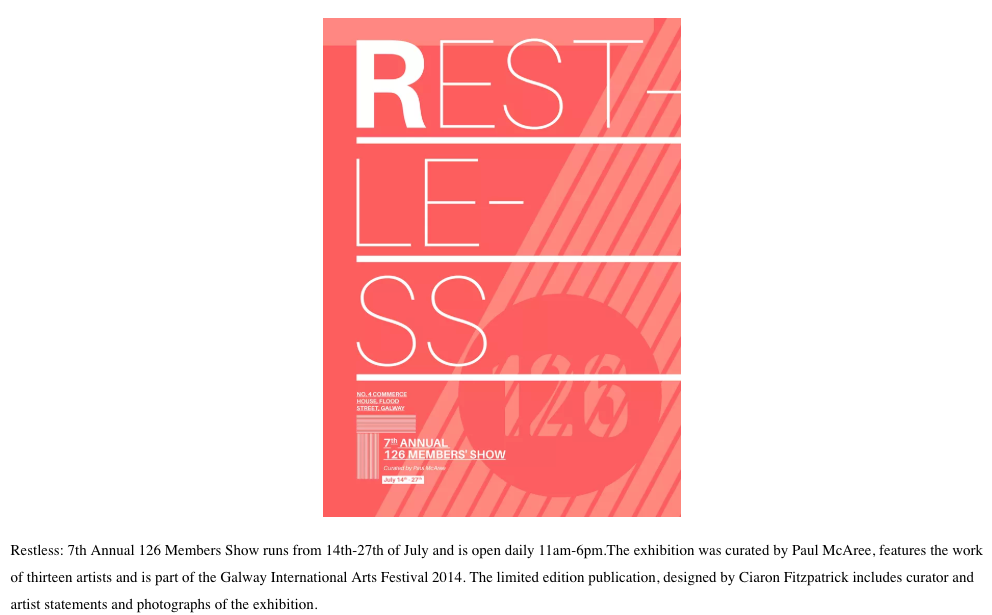 Restless does not have a distinct theme, yet belies a certain feeling from the collected work. An unease, a questioning, a poking, a teasing of possibilities. In sending out an open call for submissions, no theme was suggested, only general background interests of the curator. McAree was interested to see what would emerge and suggest itself as a show.

What presented itself was a distinct sense of questioning through a very diverse series of artworks – who we are, what are things made of, the meaning of things, of objects, of reality, of the personal, the social. The blur between reality and fiction, of burden shouldered, and sacrifices taken, of memory, of history, of contracts, of artifice.This diverse series of artworks seems to suggest a sense of where we are now, eternally never emerging from a recession, and in its various ways, teasing at the global through its collective presentation.

126 is Galway’s and the west of Ireland’s first artist-led exhibition space. 126 was established in 2006 by local artists as response to the urgent need for more non-commercial gallery spaces in Galway. Among the aims of 126 are to maintain a central permanent exhibition space and resource centre for all visual artists. Provide a unique platform within Galway for the presentation of art works that are risk-taking, experimental, in-progress, and otherwise not normally represented by commercial galleries or established institutions and to encourage a growth in the visual arts in Galway and in critical discourse in Ireland.

In addition to an opening reception on the 15th of July, there will be an exhibition publication launch and website launch of the new 126 website on the 24th of July at 6.30PM. 126 would like to thank The Galway International Arts Festival for their generous support” 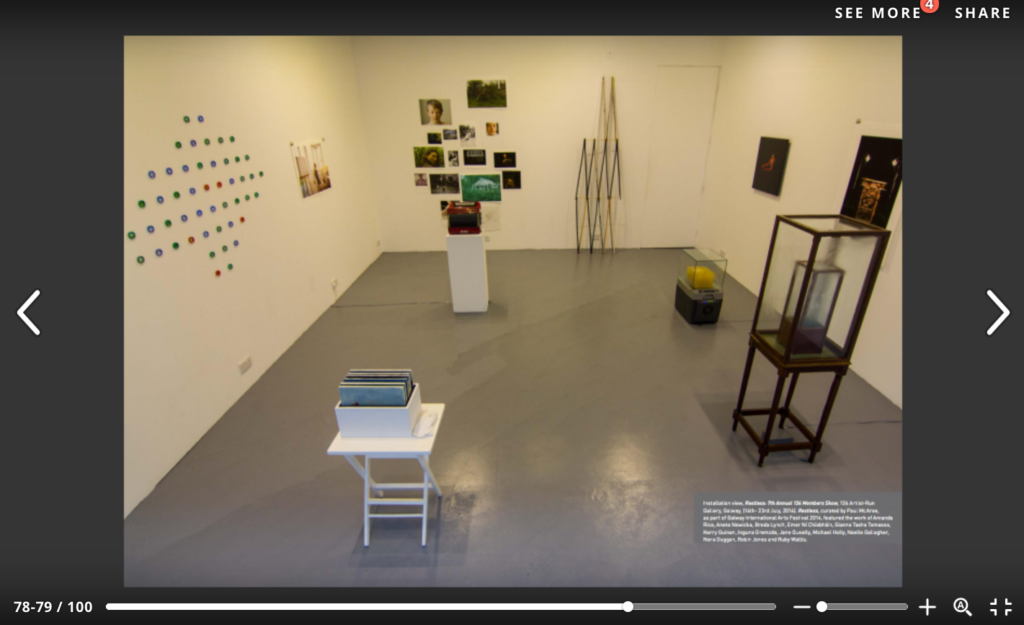 Image above from the opening night taken from the Footfall Report

FOOTFALL is a national research project devised by 126 Artist-Run Gallery to explore the position of small arts organisations in Ireland and Northern Ireland. The aim of the research programme was to develop new, nuanced means to articulate the value of the work done by smaller, diverse and risk-taking visual arts organisations based in these areas. FOOTFALL examines what separates the activities of artist-led organisations from those of other art institutions and the role they play in artists’ careers. The year-long programme of research was coordinated by 126 Chairperson Shelly McDonnell, and comprised direct consultation with the organisations, practitioners and audiences within this sector. A Plenary Session was devised and facilitated by Ailbhe Murphy and Ciaran Smyth of Vagabond Reviews as part of the FOOTFALL Symposium in November 2014. The symposium – coordinated by 126 Artist-Run Gallery and Galway City Curator-in-Residence Megs Morley – featured invited speakers: Jason E. Bowman, Valerie Connor and Mikael Löfgren, and provided a platform for discussion on key issues pertaining to the artist led sector (Plenary Session Report and Symposium video documentation).

The FOOTFALL Research Report was written by arts writer and researcher Joanne Laws. Focusing on the Irish context, the report outlines why artist led organisations are established, how they are run and the type of work they do. Those perceived to benefit from this work and the inherent ‘value’ of such activity, is discussed. Drawing on emerging discourse in the field, possible methods for measuring ‘non-economic’ value are presented. The perceived strengths of artist led organisations are identified and this is followed by a discussion of the central issues of sustainability and artistic labour. The report concludes with thoughts on whether there is a need for further organisational forms within the artist led sector in Ireland. FOOTFALL does not aim to represent the agenda of artist led organisations in Ireland but rather to generate an inquiry into the value of the labour invested in running them.